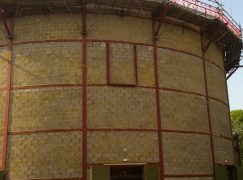 The opera house that was built in six months

Grange Park Opera was founded on a banker’s estate in Hampshire. When the landlords fell out last year with Wasfi Kani, the founder, she took the company – lock, stock and seats – to a green field in Surrey, made over to her on a 99-year lease by the broadcaster Bamber Gascoigne. Bamber had just inherited the site from a deceased duchess and was thrilled to do his bit for art. 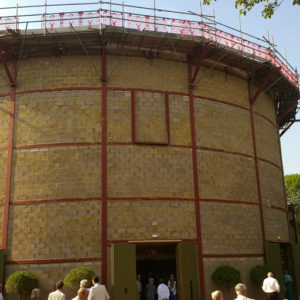 It took no more than half a year for Wasfi to knock up a brick opera house with a semi-circular interior, modelled on La Scala. The seats once belonged to Covent Garden – Wasfi bought them when the ROH was redeveloped – and the place smells pleasantly of fresh carpentry. Patrons eat their picnics in large tents and mint tea is served between the second and third act. Could you get more English country garden than that?

And it’s just 50 minutes by train from central London, much closer and quicker than Glyndebourne.

The Jenufa I saw was a 1988 production borrowed from Welsh National Opera but epically well cast with the rising Natalya Romaniw in the title role and Susan Bullock as her unyielding foster-mother. Romaniw is utterly winning as the village good girl who gets involved with a drunken rotter. Bullock starts out almost too stern to be believed (Anja Silja once captured the austerity to perfection), but her granite exterior is an ingenious front, giving way, layer by layer, to a woman broken by life’s betrayals, desperate to save Jenufa from mistakes she herself had made. It is Bullock who draws the most tears in this overwhelming production. 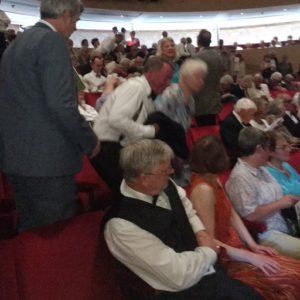 Even more than the women, the two male rivals are richly characterised. Nicky Spence is the bluff seducer with a weakness for the bottle, irresistible and pitiable at once. Peter Hoare is possibly the best Laca I have ever seen or heard, rejected in love and quick with a knife yet compelling as a loser who turns his life around. The BBC Concert Orchestra played well for William Lacey and the small chorus sounded like the Red Army on Grange Park’s confined, claustrophobic stage.

Next year, Wasfi, promises, the exterior will be tiled and the balconies painted. Meantime, she asks patrons to give back the programme books they bought because they have exhausted the print run and can sell them again.

« A laryngologist writes: Stop judging Adele. We are all at risk