Andrei Osipov was arrested in March during a rehearsal in the Volga town of Cheboksary, accused on taking part in an anti-Putin demonstration. Other muicians filmed his arrest, an international outcry followed and Andrei walked free.

Now the police have returned to arrest Andrei, once more in rehearsal. The BBC has film of his arrest and his trial.

You can watch here.

Sentenced to 20 hour of community service, Andrei said he will continue to demonstrate against corruption. 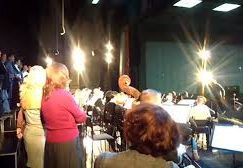