Its founder Somtow Sucharitkul has issued this final warning: ‘Opera Siam faces its fourth and most serious existential crisis in 17 years. We are going to run out of funds in only a few days.’

He adds: ‘Tonight I’m performing the Mozart Coronation Mass and other works with our kids and with many volunteer choirs including one that came all the way from Lithuania to work with us, at their own expense. In the last 17 years I’ve often been heartened by the generosity of artists and music lovers. Tomorrow we leave to Malaysia where we will do a big concert which not only celebrates our young artists but will be the first performance of some of the HM King Bhumibol’s songs in the city of Johor Bahru.

‘There’s a very good chance that if our existential threat is not resolved, that tonight’s concert will be the last time will be able to perform for you.’ 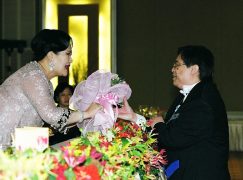