Oh dear… did I really say Mirga should find her ‘inner man’ on that Radio 4 doc? I apologise unreservedly. 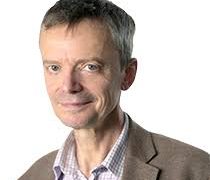