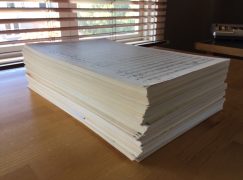 John Adams: I finished my opera

The composer tweets: ‘Voila! Completed manuscript of new opera Girls of the Golden West. 2 yrs of panning for nuggets. Time for a break.’

Elsewhere, in an interview with John von Rhein of the Chicago Tribune, he sounds gloomier:

‘It can be a challenge to fill those enormous halls with an entire program of just my music,” he said. “I was reminded that classical music is what people say it is, largely music of the past. It takes great time and effort to write music that might have a chance of entering the repertory, eventually.

‘One thing that disturbs me is that the friends I have dinner with — people who bear the same intellectual, social and political interests as I — don’t listen to my music. Very few of them even listen to Beethoven. They listen to — I don’t know — James Taylor or the Gipsy Kings. I realize I travel in a small cultural arena.’

« Classical funding is blamed for the death of small venues