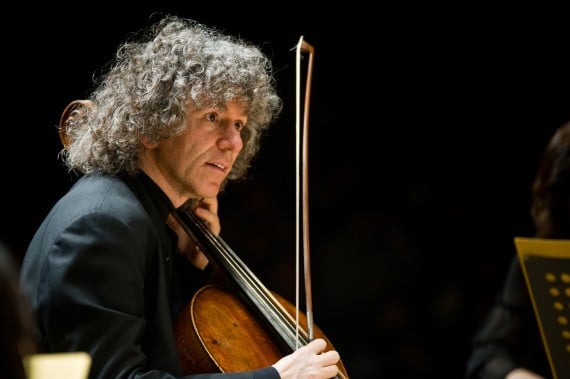 International cellist is grounded at Heathrow

A tweet last night from our friend and neighbour Steven Isserlis:

Well, this is a first, even with my history of cello travels. @KLM have refused to check me in because of mess up – I’ve missed last flight!

So we asked for a full account of his disastrous day. Here it is:

Today started well, with the presentation of the Cobbett Medal for chamber music, in a quaint and fascinating ceremony (lots of traditional costumes, stiff half-bows and banged gavils) at the beautiful Skinners’ Hall in the city of London. (And no, nobody tried to skin me.) From there, I took a mini-cab (why are they called that, when they’re generally bigger than black taxis?) to Heathrow Airport.

There was a lot of traffic, but nevertheless I arrived around 2 hours before my KLM departure to Amsterdam, from where I was to connect to a flight to Billund, in Denmark. I approached the check-in agent, who looked at me without love. I don’t know why; normally I get on well with check-in agents (until they start to give me too hard a time about my cello, anyway); but this one and I just didn’t hit it off from Minute 1. I informed him immediately – as one has to do –  that I had a second seat for my cello; he merely shrugged and went on with what he was doing. Then he looked sharply at me. ‘Have you paid for the cello seat?”. I assured him that I had, and offered to show him the letter on my computer which my brilliant travel agent, Merlin (really!) at American Express, always provides in case of trouble, showing how the cello seat is booked. He looked at it without great interest and handed it back; then he looked at his own computer screen.

‘There’s no cello ticket,’ he said. ‘I have to call the ticket desk.’ I was beginning to fume – and time was beginning to get tighter. The agent spoke on the phone, then hung up and looked at me.   ‘The cello ticket’s been cancelled,’ he said. I assured him that it had NOT been cancelled, having been booked in late May and not altered in any way since then. He shrugged (he was good at shrugging). ‘You’ll have to call your travel agent,’ he said. ‘Now stand aside and let the next customer approach.’ I did so (not, I confess, without a few muttered swear words, which is never a good idea at any stage of the airport experience). I called Amex; of course Merlin had left, and I was put on hold for rather a long time as I was passed from person to person who, it was thought, would be able to sort the problem for me. As I was on hold, the check-in agent snapped at me, quite unnecessarily: ’Take your bags further away’. Charmed I was not.

The people at Amex said they’d call me back when they’d talked to KLM; I waited for rather an alarming chunk of time, but eventually somebody knowledgeable-sounding called me.  ‘Can I speak with the check-in agent?’ she asked. I had to wait until he’d finished dealing with another customer – deliberately slowly, it seemed to me; but eventually, I was able to go up to the desk. ‘My travel agent would like to speak to you,’ I told my non-friend. ‘I don’t speak to travel agents,’ was the response. At this point, I blasphemed. ‘You have to calm down, sir,’ he told me, ‘or I’m not going to check you in at all’. I took a deep breath – and spent the next five minutes telling him what the Amex lady was saying on my phone, and repeating his replies to her down said phone. She insisted that she had talked to KLM, that the cello had been booked correctly, and that if he reloaded his screen, all would be well. He did so. ‘Nothing’s changed,’ he announced. ‘It’s still cancelled.’

‘Ask him if he has the number of the ticket desk,’ she said. ‘They’ll just tell her the same thing,’ he said. ‘There’s no point in her calling.’ I relayed this. ‘Just ask him for the number,’ my Amex lady said firmly. I duly asked. He turned to a colleague of his, and asked her something. ‘Incredible!’ I said to my caller. He whipped round. ‘What am I doing here? I’m trying to help you, and you’re complaining. I’m through with you – you can go to my colleague.’ And with that, he beckoned the next passenger over, and started serving him. End of my dealings with this delightful human being.

I stood astonished; but there was no time to protest, because the flight was due to leave in 45 minutes – and it was the last flight out that night. His colleague – once he was free to deal with me – was much nicer; but told me there was nothing he could do. He suggested I go to the ticket desk (something I should probably have done an hour earlier, in retrospect). I had been tweeting little flashes from my experience as it unfolded, and at this point I received a helpful tweet from KLM. ‘A request to transport a musical instrument needs to be placed 48 hours in advance due to limited space of the aircraft,’ I was told. I THINK some foam may have emerged from my mouth at this point.

Over to the ticket desk I went, poor Amex lady still hovering in telephonic attendance. They seemed to know about my problem, and were working on it. ‘I think it’ll be fine now,’ said my Amex lady desperately. ‘Would you mind if I leave you to it?” ‘PLEASE stay with me,’ I begged. She good-naturedly assented – which was a relief, because the ticket agent was having difficulties. He asked me for the ticket number. I asked Ms Amex. ‘I need to speak to him,’ she said. I relayed this. ‘I’m not supposed to speak to travel agents,’ he said, ‘but just this once’. I gratefully handed her over. They spoke for a bit, and he went back to his computer with renewed energy. Two colleagues of his came over and started to join in the fun (?). On it went – the flight was now officially closed; and they all seemed to be getting increasingly stressed. Eventually the first agent shook his head. ‘It’s no good,’ he said. ‘There’s no cello ticket.’

By this point, I was too exhausted to protest – and anyway, I could tell that he’d really been trying to help. Ms Amex said she’d call KLM and then call me back in 5 or 10 minutes. While I waited, I asked my ticket-agent friend if there were any more flights to anywhere in Denmark left that night. He searched, and found one to Copenhagen. leaving in less than 2 hours, from another terminal. 20 minutes went by – no call. Finally Ms Amex called back. ‘KLM will give you a full refund,’ she announced. The trouble is that they were looking at the wrong ticket number.’ We discussed the possibility of my getting the late flight to Copenhagen – which of course would be far more expensive. ‘Well, they won’t cover that,’ she said brightly. ‘It’s possible that insurance will.’ Not exactly reassuring (though I’m not complaining – she was lovely); anyway, I decided to go for it, since it was my only chance of making it to the rehearsal the next morning.

I took a taxi between terminals – by far the quickest way, though I was a bit shocked to find out that it cost £22 – and arrived panting at the Scandinavian Airlines ticket counter at the new terminal. I explained what I needed, and a sympathetic lady at the counter set to work. I managed to get Ms Amex on the phone again, and she waited with answers to any questions they would have. My ticket-lady’s boss came up to her. ‘You’ve been working too long; you should take a break,’ she said. ‘Not while she’s doing my ticket!’ I exclaimed in desperation. The boss acquiesced. The quest to provide the cello ticket continued – interminably, it seemed. The ticket-lady and her colleague disappeared into a back room, occasionally emerging to ask for details of the cello dimensions, my email address, and so on. The minutes were ticking by…

Eventually, some 45 minutes before the flight was due to depart, the ticket-lady emerged triumphant. ‘Here it is!’ she announced, brandishing a piece of paper. Then she looked at it, and her face changed. ‘Oh dear – there’s a mistake; you and your cello are sitting separately.’ Back she vanished into the back room. She came back fairly speedily, however, and pointed me in the direction of check-in.

I rushed over, and was greeted by a nervous check-in agent. ‘One moment, sir,’ she said. I waited. ‘This is my first time checking anyone in,’ she confided. Good timing. There was a lot of fumbling and whinnying – but eventually, my suitcase disappeared down the chute, and I held my boarding-pass in my hand at last. Security went by quite smoothly, and, with ‘last calls’ being menacingly announced over the tannoy, I arrived breathless at the gate.

‘Can I see your luggage receipt?’ asked the gate agent. I handed it over. ‘Hmm…for some reason, your luggage has been deleted from the system,’ she said.

UPDATE: Does that dumb airline know what it has done?