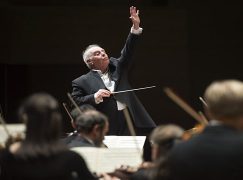 Editorial: Barenboim’s Brexit speech was out of order

On the first night of the BBC Proms, the German-based pianist Igor Levit played Beethoven’s Ode to Joy in Liszt’s solo-piano reduction as a token of his opposition to Britain leaving the EU. His was a reasoned and reasonable gesture by an artist who has strong views and wished to express them in music alone.

Not so Daniel Barenboim who, before conducting Elgar’s Second Symphony at the Proms last night, announced that ‘Elgar makes the best case against Brexit … because he was a pan-European composer.’

This was out of order.

The Proms are, and must be, politically neutral. Except on the Last Night, when the conductor gets to say a few words (usually too many) and on rare tragic occasions such as 9/11, the job of the conductor is to be seen, not heard. If he wishes to make speeches he can do so before and after in media interviews but the Proms podium is not a place for sermons, however brief or apposite.

Using the Proms as a political platform risks damaging a national treasure. What if a pro-Brexit conductor were to get up and demands equal time? Or a Corbynist? Or an Erdogan supporter? Barenboim should not have spoken.

Which is not to say he is entirely to blame for the lapse. The fault lies with the weak men – David Pickard and Alan Davey – who are employed (in titular BBC parlance) to control the Proms and their broadcasts but who plainly failed to do so. They need to be carpeted by the BBC’s DG, Tony Hall, if he still has the carpet to do so.

Despite a wonderful performance of Elgar’s less favoured symphony, this was a very bad night for the reputation of the BBC Proms.

UPDATE: This post can also be read, likely with a different range of comments, on the Spectator website.

NB: Barenboim made the specific Brexit remark quoted above in an interview with Tom Service that was screened just before the live Second Symphony performance. He made a speech in similar vein to the audience after the performance, attacking isolationism though not making further comment on Brexit.

Israel Phil’s new principal is a Frenchman from Sweden »