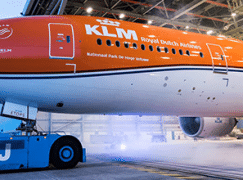 Does that dumb airline know what it has done?

We asked KLM to respond to Steven Isserlis’s account of the unpleasantness that he faced at Heathrow for trying to fly with a cello for which he had booked and paid for an extra seat.

No reply from KLM. No apology.

During the course of the day, more than 10,000 people have read Steven’s story on Slipped Disc.

That’s 10,000 people who will think twice or more before flying KLM again.

And 10,000 who will warn their friends before they fly.

Musicians have no power, but they are very frequent fliers – on all airlines except KLM.

UPDATE: A message from KLM: Dear Norman, thank you for your message. We would like to inform you that we are already in direct contact with the passenger involved. Thank you for sharing your concerns.

« Just in: A US symphony orchestra is shut down

Lucerne gives 25 grand to US pianist »