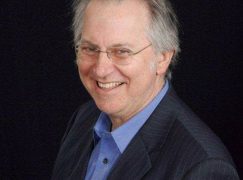 Friends and students are reporting the death, from a rapid cancer, of Professor Edward Francis – pianist, teacher and influencer of innumerable musicians.

From his official bio:

Ohio born, he moved to California in 1965, where his major teachers were Mildred McGowen-Ryan, and Peter Yazbeck. He entered CSU Northridge, (where…) his principal teacher was French pianist Francoise Regnat. He was an invited participant in the master classes of Polish Pianist Jakob Gimpel for six years…. Shortly after completing his master’s degree he was hired as music faculty at Oxnard College in Ventura County. …In 1998 he was invited by CSUN to replace his former piano professor Francoise Regnat, while she took a one-year sabbatical.

He founded and was chairman of the Thousand Oaks Philharmonic, which produces concerts featuring a professional orchestra with exceptional young artists as soloists.

Edward Francis was 61. A memorial mass will take place on Tuesday at St. Julie Billiart Catholic Church in Newbury Park.

It is with with the greatest sadness and sorrow that we have to announce the loss of our dearest colleague and friend, Professor Edward Francis, which occurred last night at 2:30 AM, PDT.
Rest In Peace, dear Edward, you were a truly unique human being, one of a kind, universally admired and deeply respected and loved! We will forever miss you!!!

Edward Francis was a great friend and supporter from my first steps upon moving to California in 2007. His collegiality, generosity and a sense of goodwill were omnipresent and provided an incredible support on so many levels! His magnanimous nurturing spirit helped and embraced so many fortunate enough to know him. He was a larger-than-life presence in the pianistic world of Southern CA and far beyond, a friend and colleague of great many pianists, educators, professionals. He is irreplaceable and will be sorely sorely missed!

Zsolt Bognar writes: The important and beloved piano teacher Edward Francis has lost his battle with cancer. He touched the lives of so many, from students who went on to have major careers to others he met and nurtured. I met him in Atlanta and will never forget his almost radiant and unassuming kindness. He seemed to embody love and dedication. He was so self-effacing when I met him that I didn’t even realize until later his magnitude in the musical world. He will be missed.

Carlos Gardels writes: Tributes to the legendary Edward Francis. It was impossible to be a pianist in Southern California to do anything or go anywhere without running into him, or feeling his energy. It’s because of people like him that things get done. His life was cut tragically short, but his legacy is as big as someone who lived 5 lives.

« The opera house that was built in six months