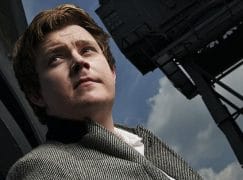 The promising Mark Simpson, composer in residence with the BBC Philaronic, has been signed by Intermusica.

He also plays clarinet and conducts.

Bio: Born in Liverpool in 1988, Simpson won both BBC Young Musician of the Year and BBC Proms/Guardian Young Composer of the Year in 2006. He went on to read Music at St. Catherine’s College, Oxford, graduating with first class honours, and studied composition with Julian Anderson at the Guildhall School of Music & Drama. Simpson was a BBC New Generation Artist from 2012-2014.

Death of a fabled instrument maker, 76 »