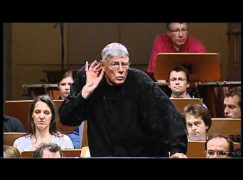 The management agency for Sir Jeffrey Tate has confirmed his death, this afternoon, at the age of 74. The eminent British conductor suffered a heart attack while visiting the Accademia Carrara in Bergamo, Italy, and could not be revived.

At the time of his death he was chief conductor of the Hamburg Symphony Orchestra.

His disability did not prevent him from working at most of the great opera houses, including the Met. At one point, in the 1980s, he was in line to become music director at Covent Garden. Amiable and sensitive, especially when rehearsing singers, Jeffrey was unfailingly well liked and respected.

He recorded extensively, most notably the Mozart piano concertos with Mitsuko Uchida.

He shared his life with Klaus Kuhlemann, a German scientist.

NB: (The Academia is an art gallery; first reports that he died in an orchestral rehearsal were misplaced.)