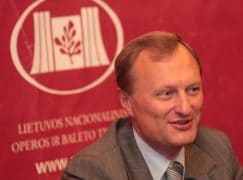 The Lithuanian Government last night sacked Gintautas Kevisas as director of the national opera and ballet, a position he had occupied for 15 years. The reason given was ‘conflict of interest’.

The entrepreneurial Kevisas was accused of making contracts on behalf of the national opera through his own private companies. Three of these contracts were with Angela Gheorghiu, the London Symphony Orchestra and the Royal Philharmonic Orchestra. The amounts involved, in a single year, came to 390,000 Euros.

When the Government began its investigation, the manager of the Metropolitan Opera wrote a letter to the Lithuanian minister of culture declaring his ‘enthusiastic support’ for Gintautas Kevisas. The minister appears to have decided that Peter Gelb’s commendation was not enough to save the director’s job. The inquiry commission ruled that ‘Gintautas Kėvišas systematically confused public and private interests.’

Kevisas, 62, was previously manager of the Lithuanian National Philharmonic and founder of the Vilnius Festival. He has connections to many artists and is said to have organised more than 80 concerts for the late Yehudi Menuhin.