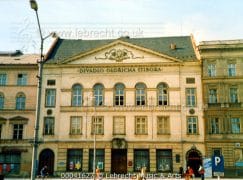 The first job Gustav Mahler held as chief conductor was in Olmütz – Olomouc – in the Czech region of Moravia. Mahler was 23. He lasted six months before landing a better post in Kassel.

Olomouc has not enjoyed much musical excitement since then.

Last week, new leaders of the musicians’ union at the Moravian Philharmonic orchestra, led a rebellion against the veteran managing director, Vladislav Kvapil.

Union members threatened to perform Friday’s open-air concert in T-shirts instead of tails. About half the orchestra declared support for Kvapil, who has been in charge for 23 years. The town hall also gave him its endorsement. But the boss, in the end, resigned.

Now the two halves of the orchestras are (we hear) not speaking to each other.