The Mongolian baritone Ariunbaatar Ganbaatar was named joint winner of the BBC Cardiff Singer of the World Song prize. He shares the prize with the Scottish mezzo-soprano Catriona Morison.

Ariunbaatar Ganbaatar, a 2015 winner of the Tchaikovsky Competition grand prix, will compete again on Sunday in the Cardiff competition’s main final, as will Morison. Both are hot contenders. 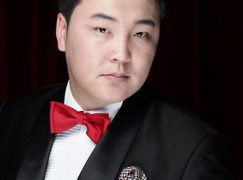