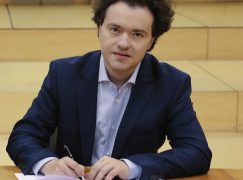 After an absence of quarter of a century, the Russian pianist has returned to Deutsche Grammophon with a new contract and a Beethoven sonata set.

After a break of 25 years, legendary pianist Evgeny Kissin has signed a new exclusive contract with Deutsche Grammophon. His discography already contains landmark recordings for the Yellow Label, critically acclaimed collaborations with the Berliner Philharmoniker, Herbert von Karajan and Claudio Abbado among them, and the association between artist and label resumes with the release of a new Beethoven album in August.

The double-disc set, its programme personally chosen by Kissin from recitals given over the past decade, includes Beethoven’s Piano Sonatas No. 14 Op. 27 No. 2, ‘Moonlight’, No. 23 Op. 57, ‘Appassionata’, and No. 26 Op. 81a, ‘Les Adieux’. It also comprises the evergreen 32 Variations in C minor WoO 80 and a profound exploration of the sublime two-movement Piano Sonata No. 32 Op. 111, the composer’s final work in the genre. The album, Kissin’s first solo recital recording in more than a decade, represents a major addition to his Beethoven discography and an essential document of his artistic development.

“These recordings were made in the moment of performance,” observes Kissin. “Live recordings always surpass studio albums for me, because I feel more inspired when playing for an audience. It means a lot to me to be able to share the spirit of that live experience with others.”