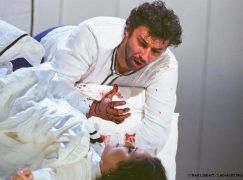 Jonas Kaufmann stands in line with the great Otellos

From his opening cry of ‘esultate!’ Jonas Kaufmann commands the Covent Garden stage as the Otello of our time.

In a role that has been owned in London by Jon Vickers and Placido Domingo for as far back as anyone can accurately remember, Kaufmann leaves no doubt of his authority. If the voice is a little light for the opening exultations, it broadens and deepens as madness sets in and Otello takes one inexorable step after another towards killing the one he loves.

He has no need to black up to represent the Moor. He is the ultimate outsider, respected and resented in equal measure by the haughty, scheming, libidinous Venetians. Kaufmann’s Otello, paranoid from the start, turns steadily psychotic in Keith Warner’s thoughtful production. He does not need Iago to arouse his suspicions; he never trusted these sex-crazed people anyway. The colours of his voice darken over three hours. Those who maintain that his is not a ‘natural’ Otello voice should listen to what he makes of what he’s got. Kaufmann is a great artist in his prime. In two or three years he will be an epic Otello.

Where Vickers was violent and Domingo pained and petulant, Kaufmann is a killing machine running idle. If he has no enemy to fight, he must turn upon his loved one, and himself. All Iago needs to do is flick the ignition. Knowing the inevitable outcome, we are gripped by the process. It is in the twists and turns of his sickened mind that we are sucked into the Otello that Kaufmann creates. By the final act, it is truly his own – a work of art for these febrile times, thrilling and moving as a great Otello must be.

Marco Vratogna’s Iago is sinuously well sung. He is a one-dimensional villain, a snake in Eden, insinuating his way into the human mind to achieve an evil purpose. He sings winningly, with subversive conviction.

Maria Agresta, acting excessively stupid as Desdemona, is redeemed by her fourth-act Willow Song and Ave Maria. A lighter voice might have been better suited to Kaufmann’s, but Agresta moves us inexorably to tears.

The set designs by Boris Kudlička are unintrusively apt, the lattice-work especially suited to the Mediterranean plot. His set is built to last: we shall still enjoy seeing it twenty years from now.

While the Covent Garden chorus under their new director William Spaulding were tremendous, I have reservations about the orchestra where the brass smudged two entries and the upper strings sound undernourished. Antonio Pappano over-conducted. Carlos Kleiber, whom I saw in this same opera and same place 30 years ago, looked as if he trusted his musicians. Pappano seemed too concerned to keep them going.

I chose to see the second performance of the run, removed from the high-fives hysteria of opening night. In the audience around me were knowledgeable men and women who had seen Covent Garden Otellos come and go. I heard no dissent from my conclusion that Jonas Kaufmann belongs now among the greats.

« Death of a Belgian conductor, 73