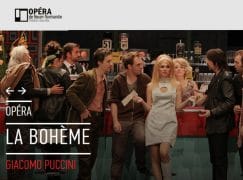 A performance of La Bohème at Rouen, in Normandy, had to be evacuated after protesters in the audience shouted slogans and threw leaflets, accusing the director of having allegedly raped one of their friends.

The protesters set off alarms as they left the auditorium, which set the evacuation in motion.

The public prosecutor’s office in Rouen has opened an investigation.

The director, warned in advance of the protest, left the city before the performance.