No-one has ever satisfactorily explained the point of the Ernst von Siemens Musikpreis, but the winners aren’t complaining. 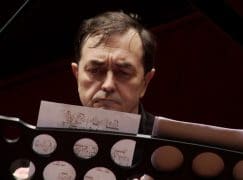