Never heard of Carbonelli? Don’t feel too bad about it. The Vivaldi scholar Michael Talbot writes that he ‘has remained unknown, even to specialists’. Listen to the music, though, and you will wonder how work of such quality and intricacy could vanish so comprehensively into the mists of history….

The restoration of Giovanni Stefano Carbonelli could be the musical rediscovery of 2017. 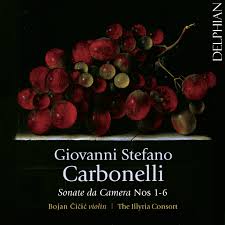