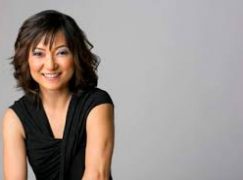 A unanimous choice for music director

It’s rare for an orchestra to agree on anything without a single dissenting voice.

Donald Munro tells us that in Fresno, which yesterday appointed a music director, Rei Hotoda was the unanimous choice among six candidates both of the orchestra’s board and of its musicians’ search committee.

That augurs well for Fresno.

Donald was laid off last month after 16 years as arts writer for The Fresno Bee. He has started his own blog here. Please share this link among friends.

He’s too good a writer to lose.

On a crisp Sunday in March, the final notes of Tchaikovsky’s Symphony No. 5 floated into memory at the Saroyan Theatre. The audience broke out in tumultuous applause. Four standing ovations followed. Many people in the audience at the Fresno Philharmonicconcert, including me, had just come to the same conclusion: Rei Hotoda nailed her audition.

That premonition was confirmed today when the orchestra announced that Hotoda is the eighth music director (and first woman) in Fresno Philharmonic history. Her name was revealed at a standing-room only event at Pardini’s.

French Romeo is lost to strike »