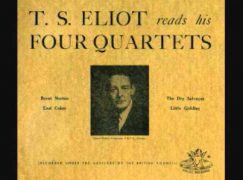 The death of the Canadian soprano Ann Watt, aged 101, calls to mind a memoir by her son, Carl, in which he describes the scene in post-War London where Ann met and married his father, the Australian violinist, Patrick Clancy Halling:

His chamber career included eight years with the Hirsch quartet, led by Dublin- born violinist Leonard Hirsch, and the formation of his own Quartet Pro Musica in 1955, which resulted in an extraordinary event taking place in the Recital Room of the Royal Festival Hall in 1958.

On the 2nd of November of that year, the Quartet convened to take part in a reading of TS Eliot’s “Four Quartets” by four giants of the arts, namely, Shakespearean scholar George Rylands, and actresses Maxine Audley and Jill Balcon, and Balcon’s husband, poet laureate Cecil Day Lewis, interspersed with a rendition of Bartok’s Sixth Quartet. (By this time, Lewis’ and Balcon’s son, future Hollywood superstar Daniel Day Lewis, would have been a little over a year and half old.) He also played with the Virtuoso Ensemble, whose distinctions are believed to have included first UK performances of works by major British 20th Century composers, Elizabeth Lutyens, Humphrey Searle, Peter Racine Fricker and Mátyás Seiber.

Now who today would dare – would dare even to dream – of putting on such inspirational concerts?

Just in: Warsaw to stage Chopin competition on period instruments »