A British conductor is deported from the US

Phil Evans, conductor of the Philadelphia Symphonic Winds and until recently director of music at Valley Forge Military Academy & College, has been deported from the US.

PSW is ‘an American band with a British accent’.

Phil has been obliged to open a Kickstarter page here to help his family with relocation costs. 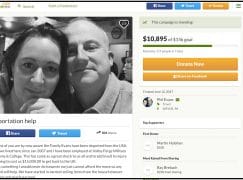