Unrest down under over Scottish conductor of youth orchestra

We have been alerted to some social-media discontent in New Zealand over the appointment of Sir James MacMillan as conductor of the 2017 NZSO National Youth Orchestra. 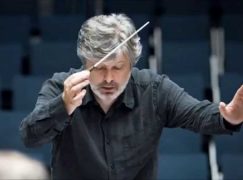 I’m writing to express my concern and disappointment at the appointment of Sir James MacMillan as conductor of the 2017 NZSO National Youth Orchestra.

Regardless of his perceived qualities as a conductor and/or composer, his role with the NYO is primarily an educational one, to foster the talents of our young instrumentalists and composers. I would contend that his extreme conservative viewpoints – anti-secularist, anti-feminist, homophobic, islamophobic, misogynistic – make him unsuitable to be teaching and leading a large group of young people in a government-funded institution. I believe the NZSO has social responsibilities as well as musical ones….

Although some of his offending tweets have been deleted, James MacMillan’s twitter account is still a source of enthusiastic, radical conservatism….Many retweets of Roger Scruton articles, including his “Becoming a Family” which aggressively advocates for a return to traditional gender roles.

The letter is signed by Alex Taylor, a former composer-in-residence with the youth orchestra. Read the full text here.