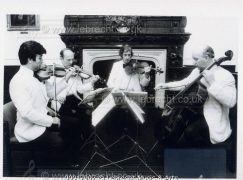 We have been notified of the death of Keith Harvey, founder-cellist of the Gabrieli Quartet for the past 50 years.

He was also principal cellist with the London Philharmonic and the English Chamber Orchestra.

Born in Liverpool in 1938, he suffered polio in childhood, overcoming those difficulties to win the Suggia Prize at the Royal Academy of Music. He was the youngest graduate to go straight from the Academy into a principal seat in a London orchestra. He later flew to Los Angeles for top-up lessons with Piatigorsky.

The Gabrielis were an adventurous ensemble who gave world premieres of works by Britten, Panufnik, McCabe and many others.

Air rage: A doublebass is smashed by US baggage handlers »