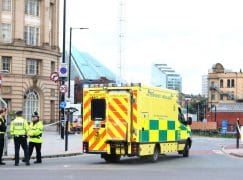 Manchester’s orchestras are muted in face of terror attack

The Halle has issued no response to the atrocity, either on its website or via social media.

The first we heard from the BBC Philharmonic is a tweet: ‘This afternoon’s 2pm concert and broadcast will be going ahead as planned.’

UPDATE: The BBC have drawn our attention to this tweet:

They further specify that the BBC Philharmonic’s first response was at 0859 on Tuesday morning with a tweet which read: Our thoughts are with all those affected by the attack at the concert at Manchester Arena last night.  Music unites us in peace and love.

The Manchester Camerata responded: ‘Here at Manchester Camerata we know better than most how integral music is to the lifeblood of this great city and we are immensely saddened that so many young people experienced their first taste of live music in such tragic circumstances. Our thoughts are with the families of those affected by last night’s incident.

‘We also know the people of this city and they’re already proving that Manchester has an unshakeable proud core – it is a city of compassion and a city of kindness. Manchester we love you.’