Label news: DG signs ‘one of the most listened-to living pianists in the world’

That’s enough these days to secure the Dutch amateur a Deutsche Grammophon contract.

Youtube description: In 2015 Amsterdam based composer Joep Beving composed and recorded his debut solo album “Solipsism” at home in the still of night. The album is filled with introspective and often filmic piano compositions. Beving’s sound could be described as the opposite to over-produced and complexly layered music styles. His ambition for “Solipsism” is to keep the music stripped back to its essence: simple sounds to express complex emotions. It represents a quest for essence and beauty, expressed in a neo-classical vocabulary. “Solipsism” refers to the philosophical idea that reality only exists in one’s mind. Everything outside of it, the external world and the minds of others, cannot truly be known and hence does not exist. Beving’s music is an experiment in existential communication, a belief in an absolute aesthetic, to prove that a universal and metaphysical reality does exist. 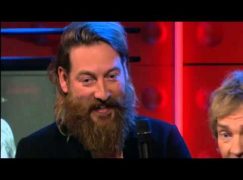