How will I ever find this record again?

…This is what makes Shai Wosner’s new release so frustrating. A fabulous pianist, incapable of touching an ugly note, Wosner interleaves miniatures of Schubert with matching — at times, surprising — snips by Dvorak, Chopin, Liszt, Beethoven, Gershwin and Charles Ives. I enjoyed the record first time round. I revelled in the connections, especially Ives, on second hearing. But now I am poleaxed by the question of where to put this record once it leaves my desk.

Seriously, it’s a problem. How will I ever find ‘Impromptu’ again when I need it to compare with some other release? If you have a solution, do let me know…. 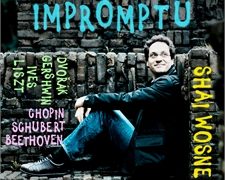