Around 1,000 people have posted comments on the main site of the conductor’s protest at the death of an El Sistema viola player in the country’s civil violence, and his challenge to the regime of ‘enough is enough’.

Among the most hostile comments is one from a post in the name of the young victim’s godfather and uncle, Guillermo Carillo. He maintains that his nephew did not die for any cause but as a victim of petty interests on both sides. He attacks Dudamel for being complicit in the present situation.

Others say that Dudamel’s intervention is ‘too little, too late,’ condemning his long collaboration with the regime.

Others still call for dialogue, tolerance, a way forward. 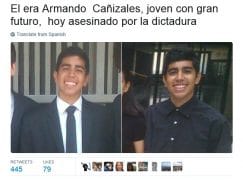