For the first time in its history, the Boston Early Music Festival has cancelled a concert because it could not obtain visas for a German-based quartet and a Dutch recorded player.

They applied twice and were refused both times, without reason.

The Boston Early Music Festival regretfully announces that due to Visa complications, Han Tol and Boreas Quartett Bremen will be unable to perform their scheduled concert. We remain enthusiastic about presenting these dynamic instrumentalists at a future date. 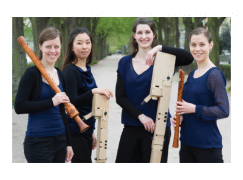