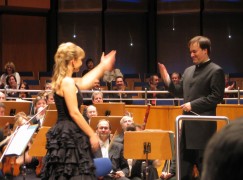 We have received the following statement on behalf of Karel Mark Chichon, music director of the radio orchestra in Saarland.

I resign in protest and solidarity with the musicians of the Deutsche Radio Philharmonie, which I have had the honour to serve as their Chief Conductor since 2011.

It is culture and music in particular that defines the identity of a nation and its people and we cannot allow the progressive dismantling of the focus of artistic creation that is a Radio Symphony Orchestra. It is ironic that the German Culture Minister Monika Grütters has several times used her success in obtaining significant increases for culture from the Bundestag to insist that it should send “a political signal to cultural leaders in states and cities not to accept cuts in culture, even in financial difficult times”.

Culture is not a luxury – it is a necessity.

In resigning now I wish it to be known that I will suffer not only financial damages but potential personal ones in my final season with the DRP, regardless of the fact that my contract ends on 31 July 2017. Nevertheless I understand it is my moral duty to the musicians of this orchestra to make this gesture of protest. If those at the helm of cultural institutions do not take a firm stand again these corrosive policies that carry no logic, who will?

I take this opportunity to thank the musicians and staff of the Deutsche Radio Philharmonie for some of the best music making years of my life. Together we have achieved great artistic success with concerts as well as recordings that I hope will be remembered for many years to come. Above all my thanks to the public we have served, who have always remained faithful to me and who have understood and appreciated the artistic transformation that was achieved during my years in Saarbrücken.