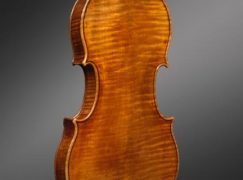 An academic survey reports that, in rigorous blind tests, most violinists prefer a new instrument to a Strad.

Does this mean past tests have been tilted in favour of the Strads?

Old Italian violins are widely believed to have playing qualities unobtainable in new violins, including the ability to project their sound more effectively in a hall. Because Old Italian instruments are now priced beyond the reach of the vast majority of players, it seems important to test the fundamental assumption of their tonal superiority. A recent study found that, under blind conditions, violin soloists generally prefer new violins and are unable to distinguish between new and old at better than chance levels. This paper extends the results to listeners in a hall. We find that they generally prefer new violins over Stradivaris, consider them better-projecting, and are no better than players at telling new and old apart.

A conductor mourns her teacher »