It’s just over a year since RTÉ lost the nearest thing it had to a sure-fire musical draw when the principal conductor of the RTÉ CO, John Wilson, exited his contract seven months early. Wilson was like the rising tide that lifted all boats for RTÉ CO concerts. Since then both RTÉ orchestras have been without the nurturing and stabilising force that a principal conductor can provide. It’s not a healthy situation. 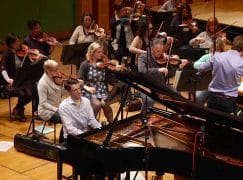