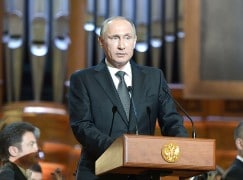 Why I’m backing Putin on Eurovision

The Russian president has banned a television show that violates human rights. This may not be his main reason for ordering Russian media to black out this year’s Eurovision contest, but his action sets the tone for what we should all be doing and I support him in it to the hilt.

Eurovision was designed from the outset to bring out the worst in human nature. The early years were spent gloating at the peculiarities of other ethnicities – look at the Swiss chap yodelling! why all do Italians croon? what does that Norwegian think he’s playing? (Doesn’t matter, he’ll get nul points.)

Around the midpoint, entrants started imitating American pop and singing in English. Commentators rocked with mirth. The hilarity increased as presenters realised how desperate small nations were to do well in Eurovision and how easy it was to mock their pretensions, knowing that few could afford to stage the monster show without blowing ten years of their GDP.

And then it got really bloody. Last year Ukraine and Russia fought a proxy war on Eurovision. Ukraine won with a song that lamented Russian acts of ethnic cleansing.

This year, Ukraine banned Russia’s singer because she had performed in Crimean territories seized by Russia.

So Russia is blacking out Eurovision.

And so should we all.

This nasty sneer show has no place in modern civilisation.

« An Italian economist breaks my fear of late Beethoven

US opera founder bows out with cancer »