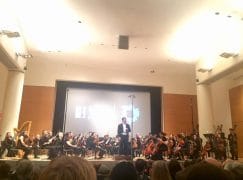 When a child disrupts your concert

David Bernard was conducting a Brooklyn Symphony concert this weekend when a little boy started talking between two pieces, Firebird and Scheherezade, and would not stop. Audience members told the mother to take him out.

The conductor invited the mother and boy to sit in the front row. He told the boy: ‘I need your help. I forgot how many times the Scheherazade theme is played by the violin soloist, and I’m hoping you can count them for me.’ Each time the theme came round, the conductor turned to the boy and showed him on his fingers how many times it was.

The idea worked. The boy was perfectly behaved throughout the piece.

This morning, the orchestra received a letter from his mother:

‘I want to thank BSO for today’s wonderful concert. I also want to acknowledge the impeccable character of conductor David Bernard. I’m the mother of the little boy that became quite noticed in the middle of the set. David was remarkable how his way of being kind and generous towards my son transpired. Thank you. Although many viewers were not pleased, people approached us after the concert and were so proud. They were proud of my son and the way David created an opportunity to be loving. My son and I traveled from South New Jersey, near Philadelphia, you hear these 2 pieces as they are some of my son’s favorites. My son wants to be a conductor. He is just 8 and also on the autism spectrum. He’s an extraordinary genius. He’s so loving that he meant no harm. He was very excited. Thank you again for this was a huge day for him. All his teachers knew he was coming even before him. It was a surprise. Overall, my son loved it all and he can’t stop talking about the 5 times the violin played and that he counted. Thank you again. Please let David know. Regards, (name withheld).

« A flurry of issues over an ‘elitist’ Juilliard feature