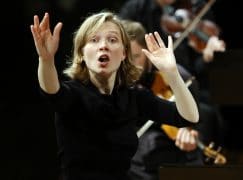 What Mirga does next

Music director Mirga Gražinytė-Tyla has unfurled her second season with the City of Birmingham Symphony Orchestra. It is nothing if not ambitious.

Mirga, 31, will conduct 26 concerts, including Haydn’s Creation, Fauré’s Requiem, Mahler 1 and 4 and a two-weekend Debussy Festival.

She will also conduct the Birmingham Conservatoire orchestra at the opening of its new building, and the CBSO Youth Orchestra.

« ENO puts together a shrunken season