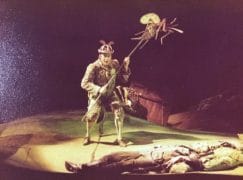 It is with the profoundest sadness that we inform you that Paul Gyton, tenor of 40 years with the Chorus, passed away in the early hours of 18 April. Only last week we celebrated his years of service with the Company, an acknowledgement which meant a tremendous amount to Paul, particularly in most recent days. Our thoughts are with Paul’s wife Alwyn, his family and friends at this saddest of times. We must also acknowledge the loss that his friends and colleagues in the WNO Chorus and wider Company will all feel at this time; they will miss him terribly….

Paul Gyton joined the tenor section of the Chorus at Welsh National Opera on 12 April 1977.

Throughout the past 40 years, Paul has contributed massively to the musical life of the Company.

His huge commitment as a Chorister, as well as being such a good colleague and a true friend to so many over that time is impossible to acknowledge easily. The sheer number of performances, places visited, miles travelled, notes and words learned and sung in languages many and varied (!) is virtually impossible to imagine.

A colleague writes: ‘Paul was the sunniest of WNO choristers and will be missed by chorister colleagues and visiting artists alike.’

Munich soloist: I turn down dates with Gergiev »