Holly Braithwaite is a soprano with Opera on Tap in Seattle.

She knows all there is to know about tenors. She’s seen them in the shower.

So when Robert McPherson starts formulating a proposal to her on stage, Holly crouches behind a seat and tries to imagine herself somewhere else.

Then she shrieks something profane.

This is not your ordinary proposal of marriage, promise. 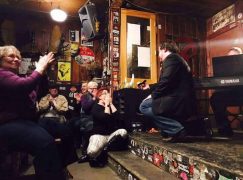