We are sad to report the death of Roger Nelson, Vice President and Chief Operating Officer of the Grand Rapids Symphony, a man widely liked across the music industry. He died suddenly at home on Thursday.

Roger joined the orchestra as a double-bass player in 1987 and performed for 17 years.

In 2002 he became part-time Operations Manager, and two years later full-time Director of Operations. In 2005 he rose to Vice President and General Manager. 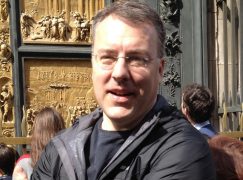