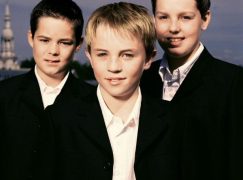 Tragedy: One of The Choirboys is killed by a train

Patrick Aspbury, of Chelmsford, was one of three cathedral singers who formed The Choirboys in 2005 and enjoyed a blaze of fame on Decca Records until their voices broke.

Patrick, 23, grew up into a promising young composer.

He was struck last week by a train at Chelmsford station.

There will be an inquest.

« A rare sighting of a new opera recording