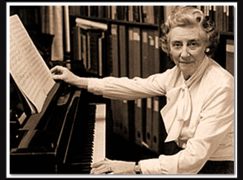 The concert pianist who owned a newspaper

The town of Enniskillen has put up a plaque in memory of a pianist who played at the BBC Proms – and also owned the town newspaper.

Joan Trimble appeared mostly with her sister Valerie, playing four-hand piano and appearing at the 1943 Proms with Sir Adrian Boult. The BBC later commissioned her to write a television opera, Blind Raftery.

Back home, her father owned and edited the Impartial Reporter.

Joan died in 2000. A plaque in her memory was affixed this week to the newspaper’s wall.

Watch: How to resolve the future of western art music »