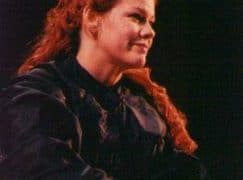 Sad news: One of ‘Three Sopranos’ has died, aged 58

Originally from Delaware, Kathleen became a stalwart on the Italian and French opera circuits after winning the 1985 Salzburg Mozart competition.

Her greatest renown came in 1997 when the impresario Tibor Rudas picked her as one of Three Sopranos, a feminine counterweight to his phenomenally successful Three Tenors.

But although they toured twice with Pavarotti, the Three Sopranos – the other two were Kallen Esperian and Cynthia Lawrence – never quite stormed the ramparts in the same way.

Her early death, on April 12, has cast a pall over the opera world. She was a fine performer and good colleague.

An Italian economist breaks my fear of late Beethoven »