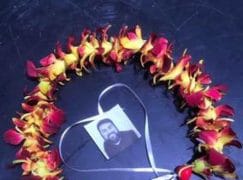 A member of the San Francisco Gay Men’s Chorus collapsed and died on stage during a break in the choir’s Friday night performance.

Ryan Nunez, 39, lost consciousness while standing in one of the choir’s upper ranks.

Chorus members who are medical personnel attempted for an hour to resuscitate him.

Ryan was the choir’s administrative coordinator.

An appeal has been posted for his funeral expenses, raising $21,000 so far.

One of our singers, Ryan Nunez, collapsed on the risers during intermission of our concert last night and, after an hour of CPR, administered mostly by chorus brothers, was pronounced dead by paramedics. They had been unable to move him from the stage, so he died on the spot where he had sung the first half. The singers waited backstage and the audience waited in their seats with me keeping them occupied with life stories getting periodic updates to “stretch.” When we got the final word, we let the audience go, with our apologies for not being able to continue.

At that point, the singers gathered in a small room and began the grieving process. I have not experienced such shock or soul-shattering grief as that. Ever. The process will continue today as we sing two more concerts – all about paradise – on the very spot where Ryan left us. A task that right now seems completely impossible to do. We are all grasping for solace.

Ryan was not only a singer, but was the Administrative Coordinator on the SFGMC staff. He was our voice to the world. Filled with humor and huge hugs for all – he just took care of everyone – first.