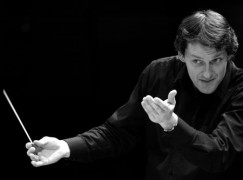 Maestro woes: Music director is laid up by car accident

The Bremen Philharmonic and the Orchestra della Svizzera Italiana have lost their music director, Markus Poschner, possibly for the rest of the season.

Poschner, 46, injured his shoulder in a car accident while driving home with his family last week. He is hoping to resume work in mid-June but Bremen are saying he is out until further notice. They have called in Jinie Ka as a replacement. NDR Hamburg has replaced him with Robert Trevino and Andrew Gourlay.

No word yet from the Swiss radio orchestra which was, until recently, under threat of abolition.

Poschner is due to leave Bremen later this year to become music director of the Bruckner Orchestra in Linz.

« Will Netrebko sell Down Under?