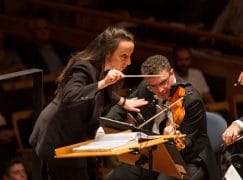 She wrote at the time: ‘Two years ago, while I was a student at the Festival do Inverno de Campos do Jordao, Marin Alsop and Osesp offered me a chance: to assist for one month the major orchestra in South America, Osesp. I could barely breath the first time I heard Osesp playing! And then a conductor cancelled, I stepped in at the last minute.. and it all started. Osesp opened a position of Assistant Conductor for the first time, and I had the chance to assist fantastic Maestros, rehearsing, conducting, preparing the choir, teaching the Academy, stepping in other times, conducting Sunday morning concerts and my own fantastic subscription week! And now this, I can’t believe it…’

« A US conductor accuses British orchestras of ‘genteel antisemitism’