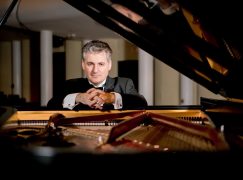 How to teach an Alabama piano masterclass from …. New York

The point of a masterclass is personal contact. No Longer, perhaps…

As Dr. Savitski performs on a Yamaha DCFX Disklavier PRO concert grand piano in New York City, a similarly equipped instrument on stage at the school’s Moody Concert Hall will recreate, in real time, his exact performance – the piano’s keys and pedals moving up and down to capture the subtlest nuance. At the same time, students will be able to watch Dr. Savitski’s live performance on a big screen TV, with the video perfectly in sync with the piano on stage.

« US orchestra sets up program for Syrian refugees