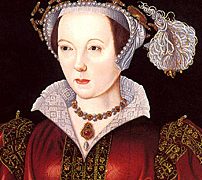 Music from Thomas Tallis’s motet Gaude gloriosa was found buried in the walls of Corpus Christi College, Oxford, in 1978. Recently, the conductor David Skinner has identified the text as being by Henry VIII’s sixth and last queen Catherine Parr.

The words are from Parr’s psalm paraphrase ‘Against Enemies’ in her first publication Psalms or Prayers, published in London in 1544, and were set as a contrafact of Tallis’s Gaude gloriosa Dei mater.

The work will be performed at St John’s Smith Square London on Good Friday (14 April 2017).

David Skinner says: ‘These discoveries are not only significant for cultural historians, but also fundamentally challenge our perceptions of Tallis’s music and chronology which have hitherto been fixed in their essentials for nearly half a century. We also have new insight into the role of a Tudor queen in Henry’s court politics. The musical Reformation seems to have come to England somewhat earlier than anticipated. Many fascinating avenues for further research, both musicological and historical, have opened up for the years to come.’

« When a child disrupts your concert

When a jazz pianist meets a Schubert Lied »