Exclusive: China cuts an orchestra down by half

We hear from musicians in the Guiyang Symphony Orchestra that they have been called in one by one to be told that playing personnel will be cut to half size next season and wages will also be cut by fifty percent.

The orchestra, funded by a wealthy local couple, has vigorously recruited foreign musicians, as well as an Italian music director, Rico Saccani.

Now, the players are being told that there will be no foreign soloists in future and the title of music director will be abolished as there will not be enough left for him to do.

A new title will be devised for Saccani, who will conduct three last concerts in June. Several foreign players have bought houses and started families in Guiyang.

No word of the downsizing has appeared in Chinese media. The players are in shock and the sponsors have not been seen for a while. The musical ambitions of the province of Guiyang have been put on ice. 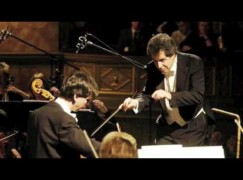