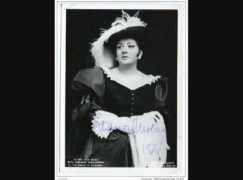 Death of a popular Verdi soprano, 79

The Italian soprano Rita Orlandi, who was billed as Rita Orlandi Malaspina after her marriage to the bass Massimiliano Malaspino, died in Milan on April 8.

Originally from Bologna, she made her 1963 debut in Giovanna d’Arco, reached La Scala three years later in Forza and specialised throughout her international career in Verdi roles, though she also sang Elsa in Lohengrin and, inevitably, Tosca.

For a soprano of her stature, she made comparatively few recordings.