The Royal Danish Theatre in Copenhagen has named John Fulljames as its next head of opera.

John has been Associate Director of Opera for the Royal Opera in London since 2011. He was beaten by Oliver Mears to the artistic director job last year when Kasper Holten moved back to Denmark.

Copenhagen is a swing-door house where directors resign every two or three years over the next round of cuts. 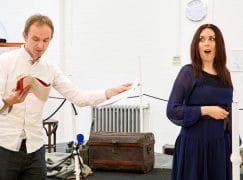