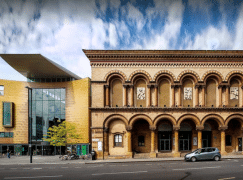 Colston Hall in Bristol has decided to change its name in order to end the association with its original owner, a trader in slaves and sugar. Edward Colston founded a boys’ school on the site in 1708. It was rebuilt as a concert hall in 1867 and hosted many famous virtuosos in the first half of the 20th century.

Today, the Bristol Music Trust that runs Colston Hall, announced that the name will change when the hall reopens after major refurbishment in 2020.

They are looking to sell naming rights to a major donor.

The Trust says: ‘We are in no way trying to erase recognition of Bristol’s role in the slave trade, and we recognise the importance of remembering the part this city played in those events as a way of shaping our city for the better moving forward. We want to embrace our position at the centre of this naming discussion to work beyond the building and help lead conversations across Bristol about diversity and inclusivity.

However, as the South West’s flagship concert venue, we also see changing the name as part of our wider redevelopment plans as an opportunity to make a clear statement that Edward Colston does not represent the values of Bristol Music Trust.’

« US chamber orchestra calls time out